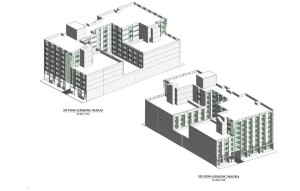 The views aren’t great, living spaces are mostly small and in some cases there’s no parking. But the price may be unbeatable at an upcoming condominium in Kaka­ako where million-dollar homes in swanky towers abound.

The developer of the planned midrise called 803 Wai­manu, which was approved by the state last year, has projected potential prices described as among the lowest on the market for the most economical units in the 153-unit condo.

By comparison, the median price for all existing condos on Oahu sold this year through May was $365,000 — meaning half sold for more than that and half for less.

The achievable price for the most economical 803 Wai­manu units was included in a draft environmental assessment filed with the state last week by the project’s developer, MJF Development Corp., headed by Franco Mola.

Achievable prices were calculated in a market study MJF commissioned from Novo­gra­dac & Co. LLP. Actual list prices could be different. Mola did not return a call seeking more details Friday.

The full range of achievable prices for 803 Wai­manu units tops out at $540,225 for one unit with two bedrooms and 1,029 square feet of living space.

Novogradac said in its report that the project, even with limited parking, should compete well in Hono­lulu’s urban condo market.

“We anticipate the (803 Wai­manu) units will be well-accepted in the market,” the study said.

Construction is projected to start in January and finish in March 2017.

Novogradac said the primary attraction for 803 Wai­manu is that it will be new and located in a walkable neighborhood. Maintenance fees should be relatively low — possibly about $200 a month for the studio units — the firm added, given that communal amenities planned for 803 Wai­manu are mainly a picnic area, three furnished roof decks and elevators.

The developer said in the environmental report that he intends to seek financing from the HHFDC’s Dwelling Unit Revolving Fund for part of the estimated $40 million project.

Under HHFDC rules, qualified projects must make at least 50 percent of units available and affordable to residents earning no more than 140 percent of the median household income in Hono­­lulu, which equates to $93,940 for a single person and $134,120 for a family of four.

MJF said in the environmental report that 66 percent of units, or 101 units, will meet that threshold. The 62 studios without parking would be reserved for households earning no more than 80 percent of the median income, which equates to $53,680 for a single person and $76,640 for a family of four.

“803 Waimanu will add residents to an already vibrant, mixed-use neighborhood through the addition of affordable and moderately priced housing,” MJF said in the report.

MJF initially sought to develop 803 Wai­manu in 2013 as a 27-story tower with 192 units. That plan, however, drew heavy opposition mainly from residents in the adjacent Imperial Plaza condo tower because MJF sought to build its project taller and closer to Imperial Plaza than Hawaii Community Development Authority rules allow.

The developer sought exemptions from height and spacing rules as a trade-off for making all units affordable to moderate-income buyers under provisions of the HCDA’s “workforce housing” rules that also prohibit government financing to build such projects.

The HCDA’s board rejected the plan. So Mola cut down the project to meet the site’s 65-foot height limit. Though the HCDA approved the reworked plan in January 2014, some Imperial Plaza residents still opposed 803 Wai­manu abutting the property line as allowed under HCDA rules and county building and fire codes.

At the time, MJF projected that unit prices at 803 Wai­manu would be affordable to people earning no more than 120 percent of Hono­lulu’s median income. 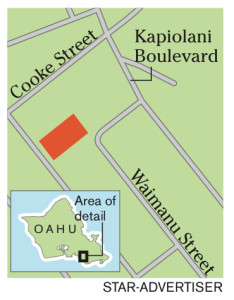